Pauls Art World review of Only The World Remains

Bridgette Ashton and Nicole Mollet: Only The World Remains

Installation view with Bridgette Ashton: A Summerhouse for George Howard, 2006 and Model for Banqueting Hall Cavern, 2014

Artist-run Space Station 65 has reopened with a teeming evocation of staged landscapes through such past eccentricities as grottoes, follies and pleasure gardens of which – in Diderot’s phrase – ‘only the world remains’. Bridgette Ashton fills most of the space with what look like architectural models for future projects, but imagine how what has now disappeared might once have been planned, for example a summer house encrusted with seashells, and a concert hall built into a cave. Nicole Mollett amplifies the mood through painted and magic lantern slides and projections depicting imaginary creatures and features and evocative words – which chime with a further contribution from Ashton: posters announcing imaginary past events. The regaining of lost innocence rubs up against the inevitability of our demise. 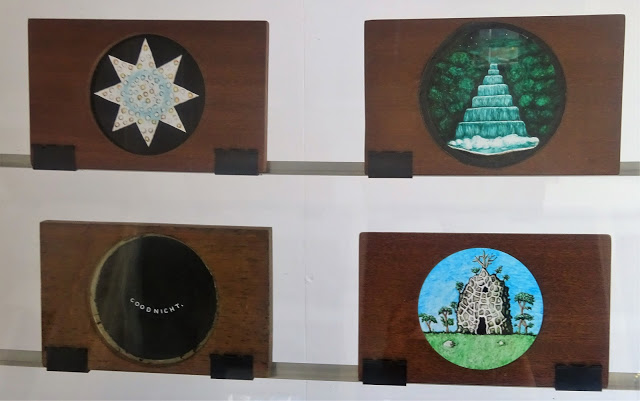